While we often use the same material to act as both an air barrier and a vapor barrier, the functions are different.

Air barriers are designed to stop air movement through the building walls and roof. There are two reasons this is important:

• Air carries heat. We want to minimize the flow of building heat to the outdoors.

• Air carries moisture. This moisture may be deposited in the building structure as it cools and condenses. This can cause damage to the building.

A vapor barrier, vapor retarder or vapor diffusion retarder (VDR) is designed to protect the building from moisture damage. A VDR minimizes (but does not completely stop) the diffusion of vapor from inside the house to the wall or roof cavity. Remember that no air movement is necessary for vapor diffusion to take place. We also said that air leakage is roughly one hundred times more important than vapor diffusion, with respect to moisture damage to buildings.

Qualities Of A Good Air Barrier

These are qualities of a good air barrier:

• Durable, ideally lasting the life of the building.

• Strong, and either rigid or well enough supported to stay in place.

• Resistant to moisture, rot and chemicals.

Common air barrier materials include polyethylene film and housewraps. We’ll look at those first, and then look at several other materials that act as part of the air barrier system in a house, sometimes by accident.

Polyethylene – Polyethylene sheets have traditionally been provided on the inside face of wall studs and on the underside of ceilings, immediately behind the plaster or drywall. Polyethylene film is light and inexpensive to work with. It is also a vapor barrier.

Housewraps – Housewraps are typically spun-bonded polyolefin or polypropylene fabrics. These are good air barriers but are not vapor barriers. You can think of them as a windbreaker.

They will allow vapor diffusion readily, but will not allow wind to blow through them.

Foam insulation boards – Most of the foam insulation boards, including polystyrene, polyurethane, isocyanurate and phenolic board, are good air barriers as long as their seams are sealed with tape, caulking or gaskets. These are typically installed on the outside of a building.

Drywall, plaster and wood paneling – Most interior wall and ceiling finishes are effective air barriers, but there are many gaps at the edges and penetrations through the finishes. Conventional wisdom has suggested we cannot rely on these systems as air barriers. 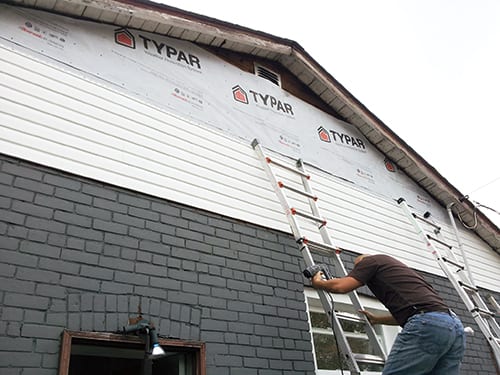 Although building paper can be used as an air barrier, it is often ineffective because of loose joints.

Other common air barrier materials include:

Vapor barriers, vapor retarders or vapor diffusion retarders (VDRs), have a different function than air barriers, although the same materials are sometimes used for both. Let’s look at the properties of a good vapor barrier:

How do we know if a material is a vapor barrier? Vapor barriers are described by their permeance. The unit of permeance is the perm. The lower the perms, the more effective the vapor barrier. Unfortunately, there are metric and imperial perms. An imperial perm is the number of grains of water that will move through one square foot of material in one hour, under a pressure difference of one inch of mercury. One grain is 0.002285 ounces.

Must Be On The Warm Side

Let’s look at some of the materials that are commonly used as vapor barriers.

Polyethylene film (visqueen) – This is probably the most common material used as a vapor barrier. As we discussed, it’s typically also used as an air barrier, immediately behind the drywall in wall and ceiling assemblies.

Aluminum foil – This vapor barrier may also be used as a radiant barrier to reflect heat.

Insulations – Some insulation materials act as vapor barriers. This includes polyethylene and polyisocyanurate boards. Expanded and extruded polystyrene boards can also act as vapor barriers if they are thick enough. The same is true of foamed-in-place polyurethane and isocyanates.

Plywood and OSB sheathings – While these materials may or may not be vapor barriers in the true sense of the word, they do have fairly low perm ratings. They are almost vapor barriers.

We have introduced the difference between air barriers and vapor barriers and outlined some of the common materials used. A more detailed explanation involving conditions, implications and strategies for inspection can be found in the ASHI@HOME training program