Mirowski Inspections Quick Tip #9 — No “Ding-Dong” at the Bell

Mirowski Inspections Quick Tip #9 — No “Ding-Dong” at the Bell

No “Ding-Dong” at the Bell 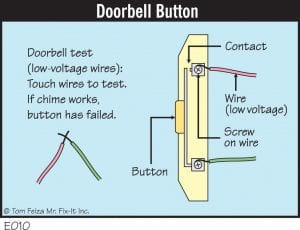 How annoying…that front doorbell only works from time to time, and you never know whether someone is there. You don’t want to call an electrician for such a small job.

Hey, it’s often a quick fix — just replace the exterior button. Doorbell systems operate at a low voltage, so you really can’t get a shock. You also can’t damage the system by attempting a repair. Give it a try.

Check out the front button and loosen a few screws holding it to the door frame. If the button is recessed into the wood, carefully pry it from the hole in the wood frame with a putty knife or pocket knife. The wires can be delicate, so be careful not to damage them — and don’t give the wires a hard tug.

It is really that simple. Most doorbell failures can be traced to the exterior button, which is exposed to the weather and takes a beating.